Rosemary Howlett, past President and longtime Exhibits Cochair of the Art League of the Chathams, died on Dec. 9, 2022.

For her family and friends and for the Art League of the Chathams, this a great loss and one that has occurred too soon.

Rosemary loved the Art League and devoted her time and energy to its membership and its activities. She served more than six years (2007-2009; 2013-2016) as its President and was very proud of the League’s accomplishments during that period. Of those accomplishments, Rosemary was especially proud that the League instituted the Arts Scholarship, an annual award given to a Chatham High School senior who is continuing to pursue art after graduation.

During her tenure as President, the League strengthened its financial position. The organization celebrated its 20th and 25th anniversaries during that time period, holding events that were both fun and financially successful. Solo shows in the Lundt-Glover Gallery expanded.

For the Howletts, participation in the Art League has been a family affair. Rosemary’s husband John served as treasurer for many years, and both continued helping to organize the exhibits at the ChathamTownship Municipal Building.

Rosemary was one of three Art League members who painted murals in the foyer of the Municipal Building at the request of the mayor in 2010. Her mural is a winter scene of the Great Swamp. 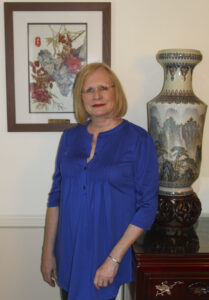 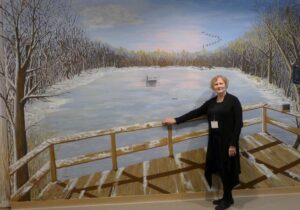 Rosemary Howlett with her mural, which is in the foyer of the Chatham Township Municipal Building

One Response to “Remembering Rosemary Howlett”